A lack of adequate housing is one of the most prominent challenges facing urban Africa. Housing – whether in the form of informal or formal dwellings – is a basic human right, yet remains only an aspiration for most of Africa’s urban population.

Although Africa remains the least urbanised continent in the world, urbanisation is now growing at a faster rate in Africa than anywhere else on the planet. In 2015, more than 50% of the continent’s population lived in urban areas. This urbanisation process continues at an unprecedented pace, with predictions that by 2050, Africa’s cities will be home to an additional 950 million people.

Traditionally, the focus of housing research studies is on formal housing and upgraded informal settlements primarily as part of economic growth strategies. In contrast, within ACRC’s housing domain, we take a more holistic view of housing. We see housing as central to protecting human rights and to improving the wellbeing of low-income urban citizens. We intend to explore the qualitative and positive developmental processes that can be achieved through provision of access to, and the development of adequate housing at different scales – from  individual- to metropolitan- level planning.

This is a different approach to current responses to housing, which focus on the need to provide mass low-cost structures that meet the bare minimum construction standards. Such developments often fail to recreate local community settings in which housing or shelter is part of a wider set of factors, resulting in improved health and wellbeing, vocational education and skills activities, which in turn link to locally based economic activities.

Providing good housing has a number of cross-cutting objectives, from improving health and wellbeing, to contributing to local sustainable building construction value chains and strengthening urban infrastructure development. It is also clearly influenced by land and finance domains, overlapping significantly with informal settlements and other social development infrastructure, such as health and education networks. 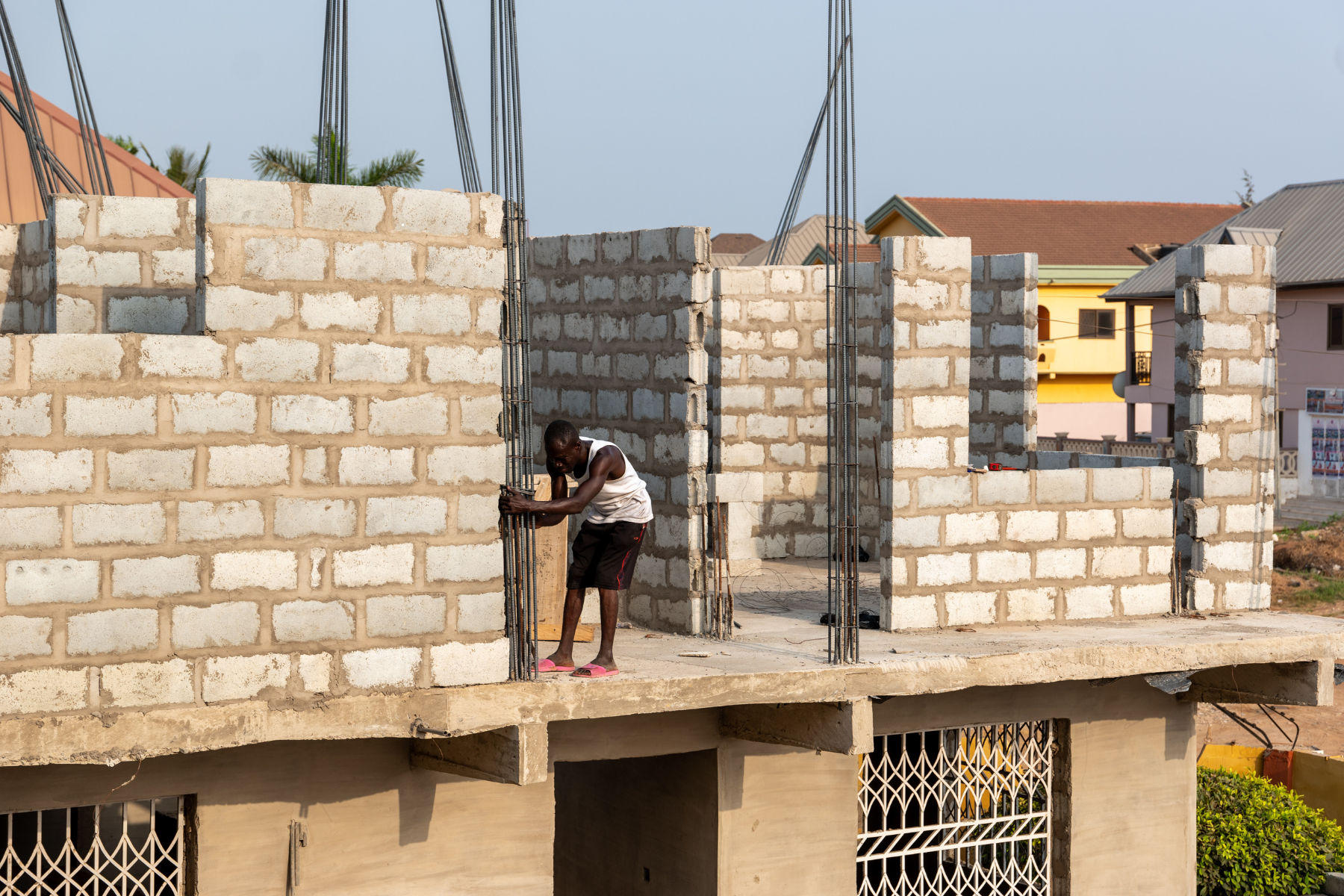 Metal worker on the construction site of a residential building in Accra attaches the reinforcing steel. Photo credit: fotografixx / iStock

In this way, ACRC’s housing domain team is challenging traditional housing assumptions. We are exploring sustainable construction processes and the housing delivery process from planning through to procurement value chains, and onto construction and acquisition processes. We will study individual exemplary houses, such as the Osae Addo and Lokko residences in Accra, Ghana.

Acknowledging the diverse and interlinked actors involved in housing production across the continent, we will also examine the role of non-conventional or traditional actors involved in housing design and delivery. These include women with limited formal education in supposedly “subordinate” roles (such as small-scale petty traders); and migrant communities who have set up local residential neighbourhoods, containing both formal and informal housing, and other infrastructure, such as schools, pharmacies and local shops, as found in refugee settlement areas in Accra, Ghana and Lagos, Nigeria. In addition, we will consider the often fluid relationship between the informal and the formal in African housing, considering what differences and continuum linkages there are between squatting, renting and home ownership.

Our vision is that the formal housing sector can be part of a multidisciplinary and multi-agency process through which Africa’s urban population has access to improved quality of life. We expect to have strong disciplinary linkages to research into land and connectivity, health and wellbeing, informal settlements, and the cross-cutting themes of gender and climate resilience and its effect on future house building and upgrading.  Conceptually, our focus is on exploring and developing our engagement with this rights-based approach to housing, from the individual- and community-led to private–state scales.

We are interested in how the formal housing sector might better link, and not simply overlap, with informal structures and processes to provide shelter. We will explore the potential for housing provision itself to link into local sustainable socioeconomic networks that create inclusive development and growth. We believe that there is a plurality of actors who are engaged in different modes and areas of housing production, at different scales and in different areas. This ecosystem is often non-formal and therefore overlooked, despite linking directly to and often underpinning the formal housing sector through its value and supply chain links, as is the case of cement procurement and distribution networks across much of Africa.

In our search for evidenced successful practice in other urban networks with similar challenges, we will undertake case study analyses of different forms of housing planning, design and delivery – across ACRC’s focus cities but also farther afield, including Latin America. We will be working closely with the consortium’s uptake teams on a city case basis, and hope to contribute to current urban policy development as it affects future housing planning in some of these cities.

In other cities, our engagement may be more with the procurement and design planning actors. Our role may be, for example, to challenge and advise on ways in which existing value chains might become more sustainable, work more to incorporate unrecognised actors, and become relevant to the future urban needs.

Ultimately, we aim to use our research findings from the housing domain to provide new insights into how our understanding of housing can be expanded beyond its value as an economic resource, to being central to human rights. We aim to highlight the integral part housing must play in holistic sustainable urban development processes, and in enhancing wellbeing, particularly for the poor and lower-middle-income residents of Africa’s rapidly growing cities. We believe our case study approach is an essential way to spread and embed this information for Africa’s future urban actors, planners and protagonists.

Read more on the challenge of securing decent housing in Freetown.

← Grant awarded for land value study in Kigali Postdoc Profile: Abdifatah Tahir →
We use cookies on our website to give you the most relevant experience by remembering your preferences and repeat visits. By clicking “Accept All”, you consent to the use of ALL the cookies. However, you may visit "Cookie Settings" to provide a controlled consent.
Cookie SettingsAccept All
Manage consent