This is the second blog in the series, focusing on the theme of remaking the city from the margins.

Remaking the city from the margins

In addition to workshops and contributions focused on the materiality of development trajectories in African cities, the UTA-Do African Cities Workshop also included presentations that unpacked experiences of marginalisation – shedding light on subjective ways of reimagining the city, many of which remain peripheral within the field of urban studies.

Echoing some of the central theoretical considerations raised by Jethron Ayumbah on the various forms of UTA-Do, Sabatho Nyamsenda, a political scientist and lecturer at the University of Dar es Salaam, presented research on local and community-driven approaches to resistance in Dar es Salaam. Sabatho presented his research on labour informality in Tanzania, relating this to economic theories and framing of informal workers as entrepreneurs. Echoing back to Hernando de Soto’s conceptualisations of dead capital, Sabatho presented how informal workers in the UWAMATA Bus Drivers Association, the women of Manzese, and BodaBoda taxi drivers throughout urban Tanzania challenged the insecure working conditions they experienced in the face of formalisation.

A shared discussion on queering the city was led by Keguro Macharia, an independent scholar from Nairobi, and Eddie Ombagi, postdoctoral fellow at the University of the Witwatersrand. They extended the conversation around marginalised urban experiences. This complementary exchange covered historical and contemporary questions of queer urban subjectivities, and the intersections of gender and sexuality in the African city.

Referencing the city of Nairobi, Keguro proposed imagining the city through an abolitionist framework, where city dwellers are not policed but, rather, are allowed to enjoy and own the city as theirs. He provoked attendees to explore a thought process through which the city was viewed less as a space or mode of production, and more as a place continually in the process of becoming for all its residents. Similarly, in his description of Nairobi as a shot of whisky, Eddie underscored the value of temporality in the making and re-making of the city. Through this lens, time, change and continuous transformation become central elements in understanding queer urban lives in a context of social progress and movement towards inclusion and equality.

A hybrid lecture delivered jointly by Willie J. Wright, assistant professor at the University of Florida, and Adam Bledsoe, assistant professor at the University of Minnesota, resonated with notions of reimagining the city from the margins, specifically through the lens of Black geographies. Introducing the origins of Black geography as a theoretical discourse emerging out of Black studies, Willie and Adam described race as a social and economic indicator located at the heart of how cities are experienced in the USA as sites of structural inequality. By challenging mainstream perspectives that dominate the discipline of geography, they highlighted the universality of Black geography to the experiences of black people everywhere. They also emphasised how a focus on Black experiences of education, housing and labour in the city exposes spatial dimensions of injustice otherwise unaccounted for. 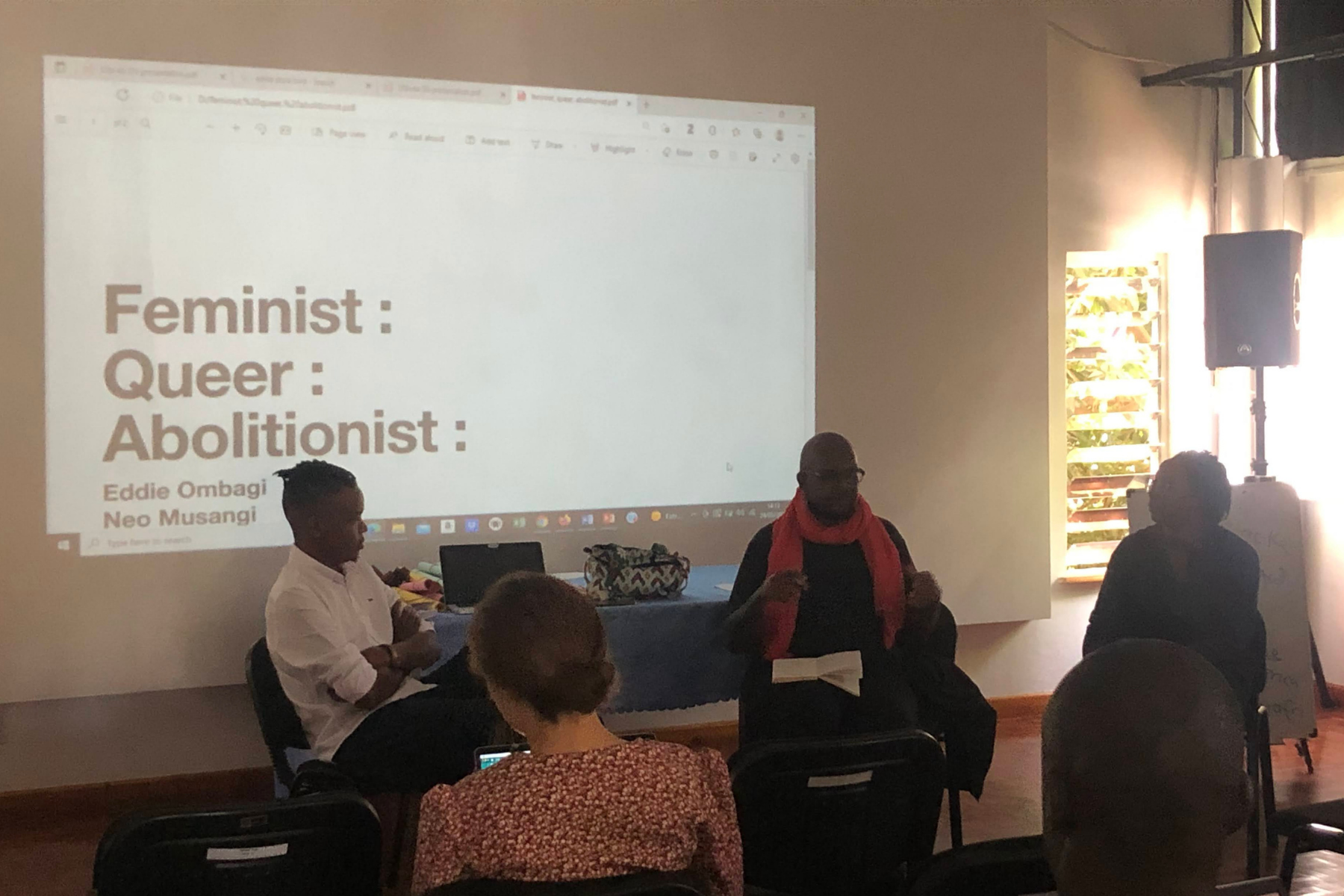 Keguro Macharia and Eddie Ombagi led a discussion on gender and sexuality in the African city.

Revisiting the themes of defiance and transgression, a hybrid lecture from Gautam Bhan offered an elaborate understanding of the relationship between knowledge and activism. Gautam’s reflections on his experiences in Delhi resonated well with insights earlier shared by Jethron on the possibilities of collective action and antagonistic urban formations. Drawing attention to instances when the political becomes technical, Gautam reminded participants that in our roles as urban scholars, we should treat research as a political process.

Gautam led participants through the Indian Institute for Human Settlements’ experiences with what he termed the “demystification of the technical”, surmising the role of the scholar-activist as: bridging the political and the technical; engaging in the long durée of knowledge production which offers new language to the marginalised; producing research in alternative non-academic platforms; producing public archives; and challenging our own locations as scholar-activists. His counsel was for participants to be always conscious of the risk of depoliticising processes that are intrinsically political. This, he argued, can be done by always knowing when one is being used to shut the politics out and by a refusal to legitimise processes that seek to displace the political.

Adrian Wilson and Mario Schmidt put a spotlight on Nairobi as a place for scientific and political experiments, while noting the ethical problems that emerge from this. They observed the increased intrusion of randomised controlled trials (RCTs) into the cityscape to correspond with the turn towards evidence-based development aid. Identifying Nairobi as a key locus for these experiments, Adrian and Mario pointed out that Nairobians participate in RCTs and behavioural experiments which benefit mostly western scholars and local elites, while subjecting participants to substantial risks. They reminded participants of the heated debate that emerged following the publication of a paper by four economists, which was based on an RCT involving the disconnection of water services for inhabitants of Kayole in Nairobi over non-payment of water bills. According to Adrian and Mario, although many of these studies are presented as unproblematic, they often raise serious ethical questions and have damaging outcomes for the subjects.

With plenty of opportunities to engage with fellow participants during the workshop, a number of sessions were designed specifically to bolster the budding skillsets of early career researchers in the room. Academic and non-academic participants were encouraged, through interactive and practical sessions, to reflect on how we could write the African city from diverse and multiple positionalities. In an interactive lecture, Amollo Ambole, a design researcher and lecturer at the University of Nairobi, shared her career path and journey as inspiration for participants to identify their own milestones and aspirations and to develop their own mission statements. Through this exercise, we were encouraged to understand our own journeys, strengths, accomplishments and trajectories as positionalities from which we could frame and shape our work, and direct our objectives and ambitions forward.

This self-reflective session was complemented by a working group activity led by Wangui Kimari on the diversity of methods used in studying the city. The session began by encouraging us to consider our positionality and the power dynamics that characterise our research context and relations. Using this, Wangui underlined how theory and positionality shape the ways in which data is collected, the particularities in the data that we concentrate on, and the importance of triangulating methods as a way of validating our research. Participants were then asked to identify unique methodological tools and approaches to research, and groups identified a range of tools, including group video analysis, sketch analysis and participant diaries. Attention was also given to the value of participatory action research and street phenomenology – or walking interviews – in underlining the relational nature of place in urban spaces, alongside other methods generally deemed conventional. This links back to the importance of collecting data in a non-extractive way – a key point raised by Jethron in his keynote lecture at the start of the workshop, who noted that “Africa needs to be treated as a source of knowledge, not as a source of data”.

Peter Ngau, associate professor of urban and regional planning at the University of Nairobi, also contributed to this discussion on research methodologies. Sharing his experiences of being an urban practitioner and activist, he also acknowledged the importance of publishing as part of an academic’s career trajectory. Similarly, Mary Lawhon, senior lecturer in human geography at the University of Edinburgh, gave a lecture on navigating the intricacies of writing journal articles and getting published. Mary shared experiences on the challenges and rewards of academic writing and offered valuable tips on framing, and claiming, specific theoretical discussions when designing academic papers. Workshop participants were also offered an opportunity to apply for a number of grants offered by the generous funders who made the UTA-Do Workshop possible (listed below).